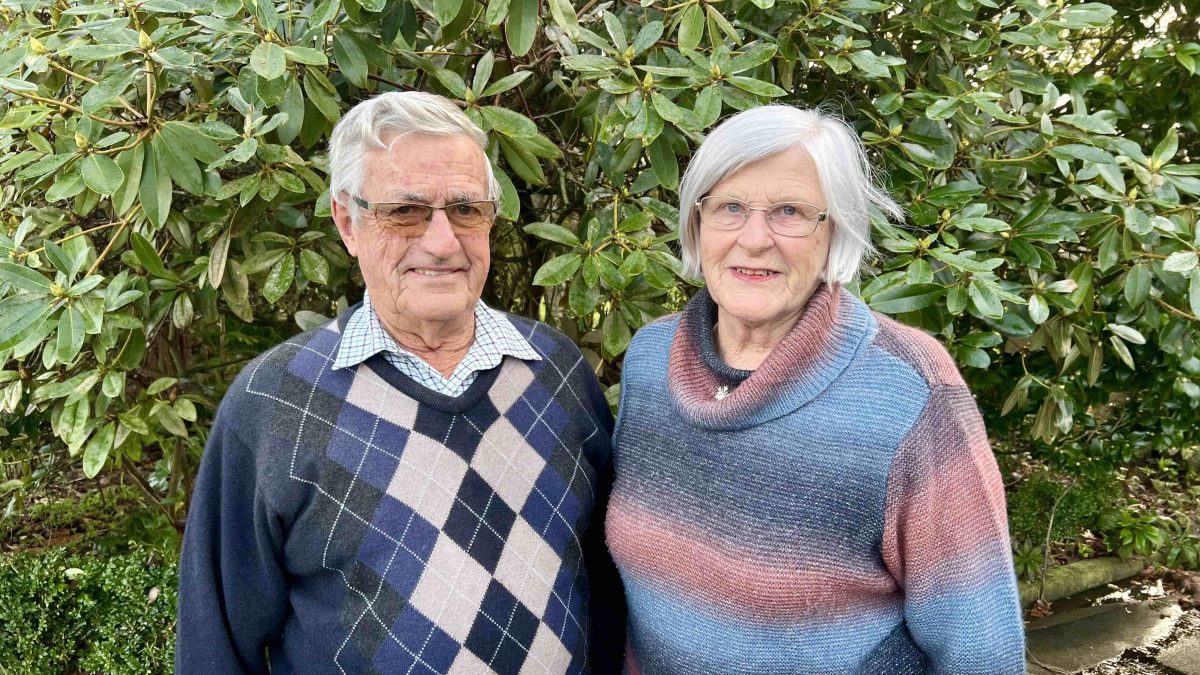 As part of our National Volunteer Week celebrations we sat down to chat with long-time volunteers, Chris and Maurice Entwisle.

Chris has been part of the volunteering community surrounding Arohanui Hospice, on and off, since 1989 – before the Hospice building was constructed.

Her father had died of cancer before hospice services were available and that experience enabled her to see and wholeheartedly believe in Garth Wallace’s vision for what would become Arohanui Hospice in the years to come.

At that time, Friends of Hospice were the ones doing an outstanding job raising money to help get Hospice off the ground. Chris volunteered with the Feilding Friends for a number of years, who coordinated fundraisers including a cook book, street appeals, and raffles.

In 1991, Arohanui Hospice officially opened and began to operate with Sue McOviney as the founding volunteer coordinator. Chris then put her hand up to volunteer in the inpatient unit helping with laundry, kitchen, and housework duties which she did for a number of years before taking a step back as she focussed on their growing family.

Reflecting on this time, it’s clear that the community of volunteers that surround the Hospice are the reason that Chris has continued to volunteer for Arohanui over the course of the last 30 odd years.

“The community spirit and camaraderie that these volunteers bring, it’s just amazing. Maurice and I have made many dear friends over the years through this family of volunteers,” says Chris.

Maurice has hung up his hat, or more accurately washed and presented to his replacement truck driver, in the last couple of weeks after approximately 15 years of being an integral member of the volunteer whānau.

Unlike Chris who has worn many different volunteering hats over the years, Maurice joined our Palmerston North Hospice shop, which moved twice during his tenor, as a truck driver volunteering one day a week with two other brilliant volunteers, Roger O’Sullivan and Rob Williamson, whom he helped out with originally.

“Then when those men retired I then started with two more brilliant men, Michael Ongley and Ian Pellow. Us three guys came from completely different backgrounds. I had been a farmer, Michael was involved in real estate and Ian had been in telecommunications yet despite this, we got along extremely well and boy the conversations we’d have in the truck as we were travelling to deliver or collect donations, we must have covered everything from business to politics, to religion, you name it. What’s said in the truck though, stays in the truck you know.”

“We are very fortunate for the friends we have now from these years of volunteering together,” says Maurice echoing Chris’ earlier sentiment.

Chris rejoined Maurice as a volunteer at the shop in Rangitikei Street. “One of the girls had injured their leg so I offered to come and help and then stuck around. I was part of the incoming goods team which receive and sort the donations, and I found that really useful as it gave me an oversight into every aspect of the shop,” she says.

“I’m in the books section now as it’s a bit easier to sit while I work, but I’ve been happy to help out now and then in many of the areas across the shop. I also used to take cast iron that was donated home and do it up to help the shop get a better return for it.”

Throughout their retelling, Chris and Maurice banter back and forth remembering names and additional details. It’s evident that throughout all the years the aroha within this community has outweighed any frustrations or personality clashes they’ve experienced. It truly has been an extended family for them.

When asked what they’d say to someone thinking about volunteering, “Do it!” they both exclaim to me. “Hospice has been a cause we’ve believed in wholeheartedly. You know, over the years friends and family have been through the service, and it just reminded us why we’re doing it,” says Chris.

Maurice adds, “Whether you’re volunteering for hospice or somewhere else, it adds a great richness to your life. Find the cause that you believe in, that aligns with your values, and just go for it. There are so many out there.”

“At the end of the day you have fun and a lot of laughs,” says Chris fondly.