Arohanui Hospice: 30 Years and Beyond 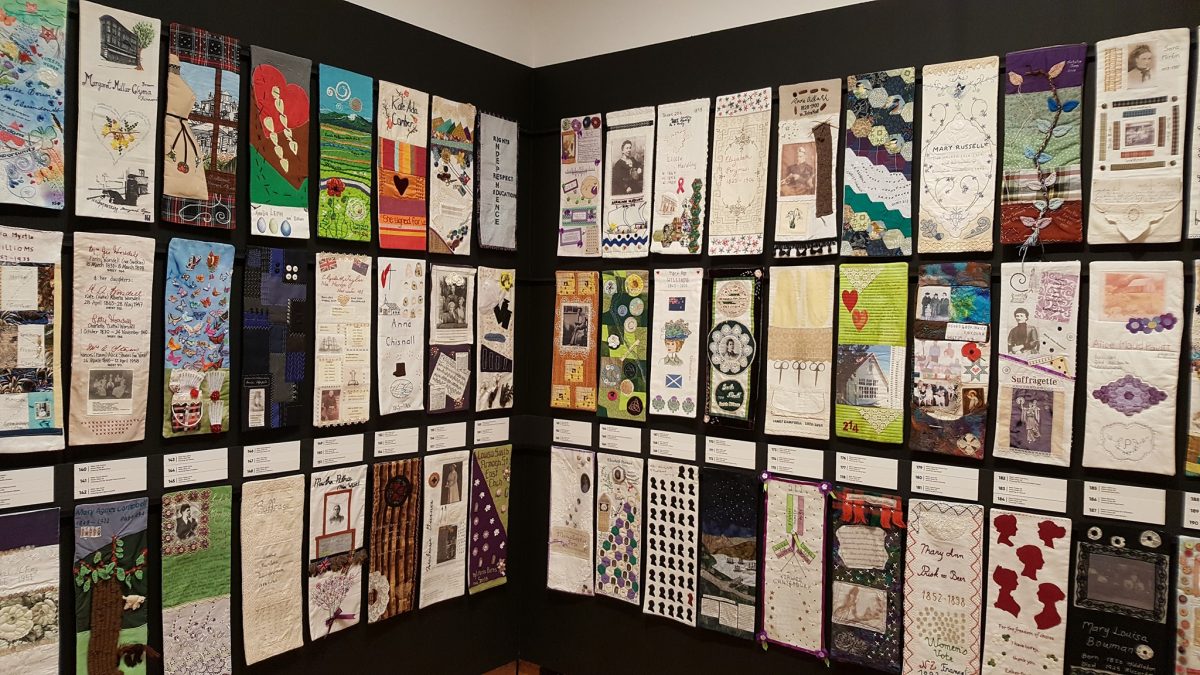 Te Manawa currently is hosting an exhibition called ‘Suffrage in Stitches’. This project commemorates 125 years of Suffrage in New Zealand and was an initiative by St Vinnies Resew, an up-cycling, sustainable sewing initiative, in collaboration with Wellington Museum where it was first displayed in 2019.

Arohanui Hospice’s Day Stay Coordinator, Faye Lloyd, heard about this project through a family member in Wellington – both completed and submitted short biographies for ancestors who signed the petition as part of suffrage petition commemorations for the National Libraries He Tohu exhibition. Faye enrolled to complete a personal panel for one of her ancestors, but thought it would also be an inspiring activity for Arohanui Hospice as part of the Creative Living / Day Stay programme.

There were to be 546 panels representing the number of sheets signed on the petition, with 46 individual hand stitches on each one that totalled the number of signatories (25,521). The size of the panel was given (55.5cm x 21.5cm portrait) and the combined 300 metre length (if all the panels were to be laid end to end) represented the total length of the 1893 petition.  Other than that guideline, each participant could create what they wanted.

Arohanui Hospice requested that the group’s panel would honour someone who signed from the Manawatu and was assigned ‘Mrs John Collis’ – a woman who signed petition sheet number 516. She had a small biography on the New Zealand History Website’s database. From Longburn, Eleanor was newly married and the biography suggested she worked in the recently opened freezing works.

A photo of Eleanor was found online and printed onto fabric. The group then planned how they would complete a panel.  Patients and volunteers chose and hand stitched on individual lengths of lace or made button flowers.  One of our patients hand stitched Eleanor’s name, a volunteer machined on the photo, another cross stitched pansies for the 46 individuals to be represented. One volunteer contributed some of her Mother’s tatting from her wedding dress. All fabrics, lace and buttons were donated to Hospice, recycling of materials was encouraged by Vinnes resew.

This project was creative and enjoyable – it offered the opportunity to discuss the Suffrage petition, who signed and why, the temperance movement, early settlers and their lives. We looked up some of the patients’ family members and found their signatures on the database.  It created opportunities for patients and volunteers to share their own stories and memories.  They followed with interest some of the other panels being completed and the variety of techniques used, such as: embroidery techniques, cross stiching, knitting, crocheting, weaving, painting and collage. Photos of panels told the story of other local signatories,  such as Louisa Snelson who was known as ‘‘Mother of the Manawatu’. Amelia Managh’s panel was made by a former staff member.  Amelia had 18 children with the youngest twins born when she was almost 50! Patients remembered their mothers ‘button jars’; sewing and knitting for their children; preserving from the garden; occupations of the past and present.

The group talked about how they might honour their own ancestors and contemplated what a panel might look like if they were doing one about their own lives. It was also an opportunity to promote the Hospice biography service and how volunteers could help record life stories for our patients.

The project reached far into the community – a couple of volunteers tracked down one of Eleanor’s descendants, who at 90 years’ old came to Hospice to see the panel honouring his Grandmother.  He brought in a booklet on the Collis family history including some of Eleanor’s early settler life to share with the Day Stay group. The descendant expressed surprise that his Grandmother was one of ‘those women’ but discovering the Collis family had strong Methodist connections suggested that Eleanor would have signed due to her involvement in the Temperance Movement.

There was a great sense of achievement from the group in being able to participate in something that was part of a bigger community project, contributed to by many different people up and down the country and even overseas. Knowing that Arohanui Hospice’s panel was going to be on display in a major museum and also now on the ‘touring database’ for museums, and likely visiting other centres, was a sense of pride – the idea that in the years to come, this project and the other panels may be on display again at later anniversaries.

Arohanui Hospice’s group got involved in ‘Suffrage in stitches’ as a “nice little project”, but the discussions and interest continue – it is Creative Legacy.

The panels and the stories about them can be found here

The exhibition is free and is located in the Art Gallery at Te Manawa. The season has been extended until the 19 September . Faye will be onsite at Te Manawa as part of ‘Maker’s days’ on Saturday July 12th from 11-2pm.